If, like me, you often get confused with WinPE versionning, here below a quick summary :

Thanks goes to Misty on reboot.pro for making this clear ! 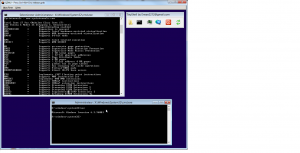