I recentely got myself a cheap laser tag at dx.com.

I decided to test the following : a laser detector, i.e detect thru a photo resistor (also called light dependent resistor) when my laser beam is interrupted.

First lets have a look at the wiring 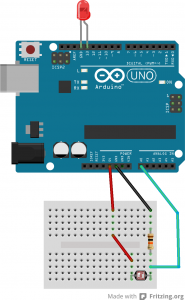 Then lets have a look at the code (change the extension to ino or pde) : laser_detector

And last, lets see it run : see the led going off each time our laser beam gets away from the photo resistor.